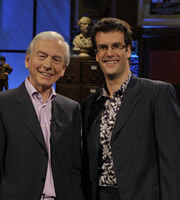 Reading The Da Vinci Code by Dan Brown: 0/10 for literary. 10/10 for storytelling

Listening to The Chris Moyles Show on Radio 1: 5/10

John Humphrys and Marcus Brigstocke do some moonwalking.