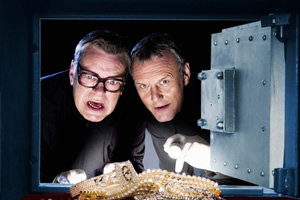 The Invisibles writer William Ivory talks about the background to the show:

I wanted to write a series about a group of people who simply would not go gently... And about real friendship too, and how it endures through thick and thin. Of course, if you're a world famous jewel thief, the inability to give up your former life can prove particularly tricky as you move into your later years... it's not like you're going back to fitting spare wheels in a garage, after all.

And that's where much of the fun of the series lies, in the juxtaposition of people of a certain age and responsibility who not only refuse to conform to their stereotype but also, because of the nature of their past exploits, refuse to acknowledge that they not only risk general ruination of a happy retirement, but their very liberty on the streets.

In Maurice (Anthony Head) and Syd (Warren Clarke), though, I felt I had just the men for the job of utterly irresponsible (re)living. Mo is vain and pompous and given to outbursts of pure pique. Syd is over stimulated, pathologically optimistic and always forgetful. They are the perfect team for slipping back into the past, underprepared, over ambitious and clearly outgunned. However, once in situ they are actually rather good. And though they bicker like a couple married for 40 years, there is, deep down, a love and mutual respect which means you cross either one of them at your peril. For the other will have you in his sights and won't stop until honour is satisfied.

And that's where the series started. These two life-long friends, moving into an apartment block for the over 50s, expected to settle down and take up a suitable hobby or two, there to grow quietly old. Except Syd Woolsey and Maurice Riley won't do anything quietly. Not for anyone!

In terms of research, I visited several of these purpose built retirement properties to understand what was on offer physically but essentially I spent a lot of time chatting to people of the 50+ age bracket, those nearing retirement and those with time on their hands, to see what their life expectations were. And to see how they felt about themselves, especially in a world where youth was venerated above all else.

As to the safe-cracking side of things; books were read, two people were met - nuff said!

What the series is about, is essentially a couple of ex-cons, coming back to England and re-engaging in their previous life of high end, high risk crime. What it's actually about is the fact that we have a whole raft of people with energy and dreams and time on their hands... and yet these same people are expected to settle down and not cause a fuss and just get on with growing old. Society would prefer for them to be invisible. Yet I want to show the old buggers are still alive and kicking! 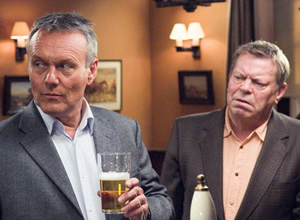 The cast is a dream. And what's interesting is to see how the relationships off-camera have started to mirror those on screen. To stand beside Tony and Warren between takes and to hear the conversations they have with each other is hilarious. They are Mo and Syd... They are the odd couple – utterly married but without quite realising it! They fuss, chide, remonstrate... and occasionally look doe-eyed at each other. Magnificent. And meanwhile, Jenny (Agutter) who plays Mo's wife Barbara looks on, smiling, slightly separate but knowing both will do her bidding at the slightest call.

Dean (Lennox Kelly), too, has subsumed his character, Hedley. He fidgets and rocks on the balls of his feet as he listens to the two older men chat and reminisce, desperate to make his own point heard yet not wanting to butt in or seem rude. Lovely! Mina (Anwar), meanwhile, seems to view the whole arrangement as slightly odd. Exactly as Helen does. They're all brilliant actors and you start to understand why when you see the lines between fiction and reality blur so completely.