Series 3, Episode 2 - The Gig And The Girlfriend 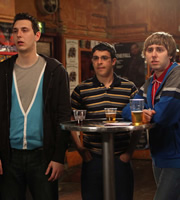 Simon is chasing a fit girl in the year below, so to impress her, he goes to his first gig since his mum took him to see Take That at Wembley Arena. Will, Jay and Neil tag along and pretty much ruin Simon's chances, but thankfully the bouncers are nice enough.