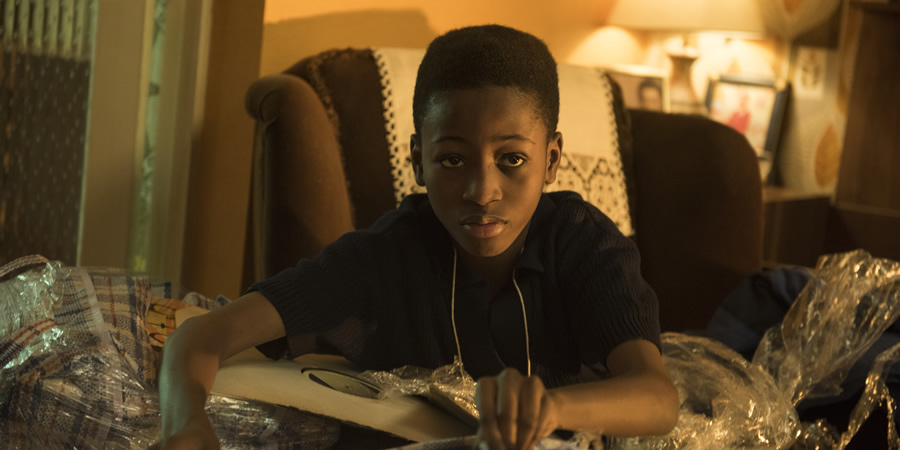 Sammy Kamara talks about what it's like to play a version of Idris Elba.

Tell us about your character...

I play the young Idris Elba! My character is called Kobna. He's a really young, passionate boy and he's learning about the two different cultures, because his uncle Valentine has come from Sierra Leone and he's telling him all the stuff that's happening there. And I'm from Sierra Leone, so I can relate to most of the stuff that happens in the series.

He's a bit cheeky. He's always calling his uncle the houseboy. And he ran away once too. He's a good boy, but he can get up to all kinds of mischief.

If he's based a little bit on Idris when he was young then is he into his music?

Oh yeah. His uncle comes from Sierra Leone and he teaches him how to be a DJ. Kobna really starts to get into it: he starts DJing at parties, all kinds of different stuff. It taught me about a lot of 80s music that I've never heard before. It's very different from the music we have now but, actually, it's good. I also get to dance to it a couple of times.

It's a bit weird, because there's a lot of stuff that's changed from then to now. For example in the 80s, children were allowed to go in the pubs and you wouldn't be allowed to do that now. And it's just very different, there's a big contrast. The clothes and the houses are very different and you have to wear baggy trousers. Also they didn't really have much technology then. Now we have iPhones, iPods, but then probably the biggest electronic device they had was the telephone.

What has it been like working with Idris Elba?

It's a real privilege to be working with him, 'cause he's always been my role model and idol, so I look up to him for most things. He's always helping us on the set, telling us what to do, and he's a really funny, nice person.

Is he different to how most people think?

Very different, because in most movies you see him as the big, tough person, but he's actually really nice and funny. You can warm to him. And it's good having him there because I'm playing him as a boy. There's no one better to give me advice on how to play my character!