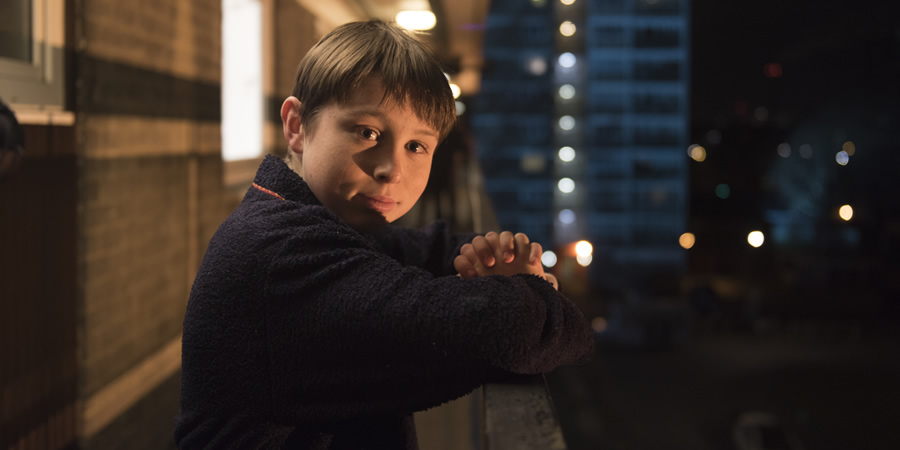 In The Long Run is the first big TV acting role for Mattie Boys.

Tell us about your character...

I'm playing Dean, who is the best friend of Kobna, Walter's son. His parents are Kirsty and Bagpipes, who are the upstairs neighbours of Walter and Agnes. That's how Dean and Kobna met. They go to the same school and then their parents are friends as well. They've just become close from that.

How have you found playing a character in 1985, a time long before you were born?

It's quite fun! The costumes are very... interesting. The funniest thing is all the old technology. It's probably quite a clichéd thing to say from someone my age, but yeah, it's weird that there were no mobile phones, and they didn't have all the big flat screen TVs in the house, they had the big box tellies. It's very different.

Oh yeah, we've become great friends. We have a lot of jokes that we have and we always like hanging around, we're never in our own dressing rooms, we're always in each other's, playing around. We're pretty much the same off screen as our characters are on screen - they're cheeky too! Always causing trouble...

It's been fun. They're so... I don't know if 'down to earth' is the right phrase, but they're just like normal human beings. There are some people who could literally be like, "No, don't talk to me, I'm too famous for you". But no, Bill, he's really funny, we talk to him. And Idris, before we were filming one of the scenes in the studios, we were all freestyle rapping together.

What's been your highlight from the shoot?

It's cool when you walk on to set, in the studios, and there's just this big wooden box. But then you walk inside and oh, it's an apartment! From the outside it just looks like a box, that's really cool.

Is this your first job?

This is my first big thing, I've done some small things in the past, but yeah, this is my first proper television thing. And I've loved it - it's so much fun.