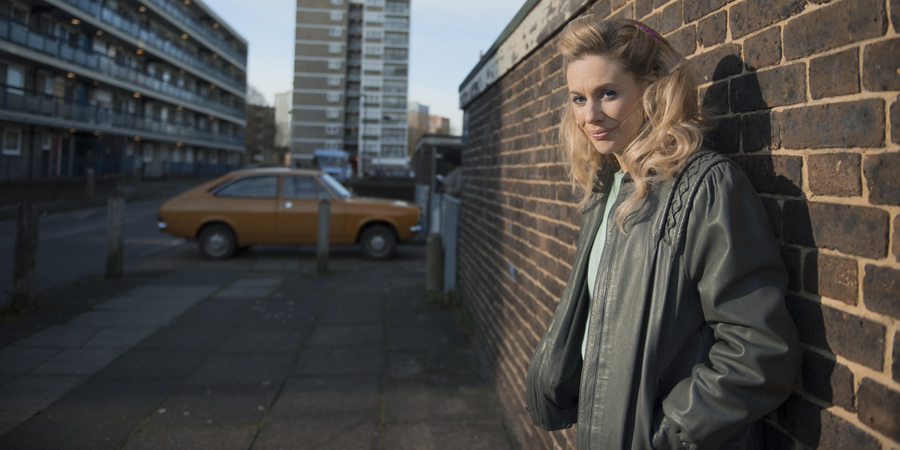 Kellie Shirley got to wear some really 'vibrant' costumes in her role as Kirsty...

Who do you play in the show?

I play a character called Kirsty, who is married to Bagpipes. They have two children together, one of whom is mixed race - and they're both white. So you can see that there's a bit of a storyline there, and I don't want to say too much about it, except that it will unfold as the series goes on.

What sort of person is she?

She's a breath of fresh air, she's fun, she likes a drink, she's a great friend, she tries to be a good mum - I think she's a good mum - but she's maybe not the best wife.

No. And they've been together for a long time. She's just a working mum, trying her best. She's bessie mates with Agnes, Walter's wife. The two families live on this council estate together, and their boys, Kobna and Dean, are the same, go to the same school and have become best friends.
Because of their sons' friendship, they've become really good friends, and they look out for each other. It's lovely: it's a really beautiful, genuine friendship. And then Bagpipes and Walter are best friends as well. You know you have those families, when you're growing up - I definitely had it - where my mum and dad had really, really good mates that we considered our auntie and uncle. It's like that.

What was it like when you walked on to the first council estate location?

Weirdly a lot of us had worked on that estate before - because it is so 80s the estate is used quite a lot. And back in the day when The Bill was up and running, that was one of the places where you used to go. So a lot of us were going, "I think I've worked here before. Yes, that's it: I was being bludgeoned to death by my pimp when I was a prostitute in The Bill." But, yes, it's a really authentic 80s council estate and it's got a very vintage vibe about it. It meant that when you walked on it didn't feel like a film set at all. 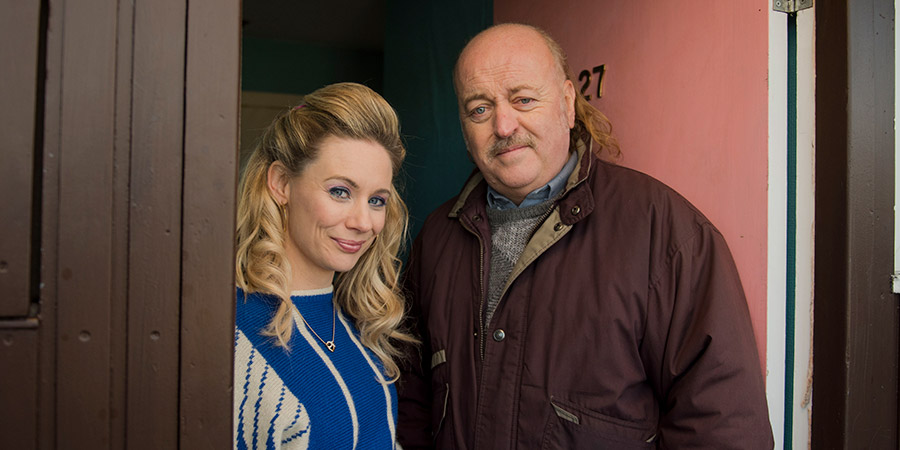 And the costumes? You have some fantastic outfits...

I'm wearing a carpet! Yeah, Mandy, in costumes, has just sourced the most amazing stuff, all of it really vibrant. I've got jumpsuits, I'm wearing a bright green dress at the moment, that is what you might call... out there. And obviously I've got the odd shell-suit in there. Best of all are the scrunchies: Kirsty rocks the triple scrunchy a couple of times for special events.

What constitutes a 'special event'?

Going to the pub. She likes 'lady petrol' - she's into white wine - and they all drink this thing called a 'Naughty Bastard' which is Guinness, Gin, Vodka, and something else I can't remember now. Anyway, that's their drink of choice.

Music plays a large part of the show. What's been on Kirsty's stereo?

Basically it was Magic Radio. And also we had this brilliant episode where there's an engagement party, and so there's lots of dancing there. The music was this amazing mash-up of western and African, which led to a massive dance-off.

Is Kirsty affected by the cultural attitudes to race back then?

The fact that she's got a mixed-race child means she certainly is. It's one of the things that the show explores. Like, for instance, about hair - she is a white woman who has a child who has afro hair, and she doesn't know how to comb it. And so Agnes helps her out. And there's a strike that goes on, and it's about whose side do you pick? We've got the Brixton riots as a backdrop. So big things that happened in the 80s are peppered throughout.

But the tone remains comic?

Yeah. It's just written so well: it's not heavy handed, it's kind of like that British Blitz spirit, in the face of stuff going on that's awful. You've got Thatcher in power, where people are losing their jobs; you've got, like I say, strikes and this massive influx of immigration. But I think Kirsty and Bagpipes, in particular, just love it - they love meeting these new people who have got different foods, different attitudes, different music. It could be quite bleak in this concrete estate, but these people come along, and Kirsty and Bagpipes completely embrace it.

What's it been like working with Idris Elba, especially as this is in part his story?

It's a labour of love for him: this is his life and his experience. But he's really fun to have on set. He's a bit naughty, he's got a real glint in his eye, he's cheeky. Sammy [Kamara] who plays him, I suppose, really rips him to shreds sometimes. And he takes it on the chin, you know. He gives everybody equal respect, and lets you get on with it and doesn't take it too seriously.