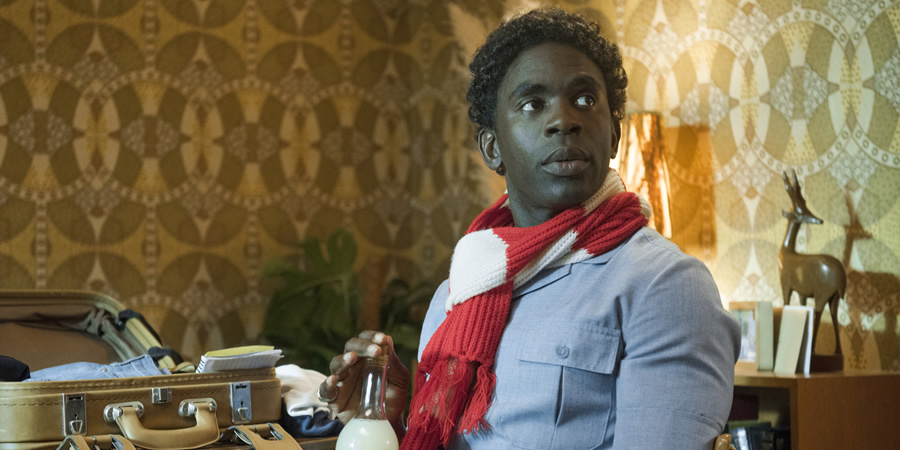 Jimmy Akingbola says he has a lot in common with his character Valentine...

Introduce us to your character...

I play Walter's younger brother, Valentine. He's a bit of a fish out of water. The others have been in the UK for quite a few years and they're already acclimatised. But it's the first time Valentine has come to London - I think he's been missing his big brother and he comes over with that blind innocence. He's determined but also he's a guy who lives his life - he has fun and he doesn't take things too seriously.

Why did he not come over in the first place, with the others?

He used to play football and he was quite well known in Sierra Leone. What I can relate to is I think he got to a point and an age where he thought if he could just get to the UK or the US the streets would be paved with gold. His brother's out there, he misses him and he wants to go out there and prove himself - as a footballer and as a DJ. Because his two big passions are being a DJ and a footballer.

He's the little brother and he's very smart. He might play like he's not catching on but he's a very clever man. But I think he enjoys being the younger, cheeky brother. I think he really does look up to Walter but he knows how to push his boundaries as well. And he's a bit of a mummy's boy - there are lots of things that Valentine's been able to get away with that Walter, as the eldest, couldn't. It's made him very confident, fearless in fact. You never know where he's gonna take you, which makes his life really interesting. Basically, as soon as he arrives in the UK I think his personality changes everybody's lives.

How did you get the part?

I was blackmailing the producer Charlie Hanson for quite a while on social media! It's so funny, because I was a big fan of Desmond's and I've always been aware of Charlie's work. As soon as I read the script I loved it, the spirit of the show and the spirit of Valentine, I connected with it straight away. And luckily, though I was in LA at the time, I was able to put an audition on tape.

Sometimes with parts - and I don't want to get too 'actory' - you just get an instant connection. This spoke to me on so many levels, in terms of the conversation about inclusivity and diversity, and I just felt like the voice related to me in so many ways. I was born in London, but as a London-born Nigerian man, I was just like, "I get this". When I got the job, I spoke to my mum and asked her, "Did you have all those signs, like, 'No Irish, no dogs, no blacks, no cats'?" She was like, "Yeah". I was like, "Were you worried?" She was like, "No, I wasn't worried". I was like, "OK". 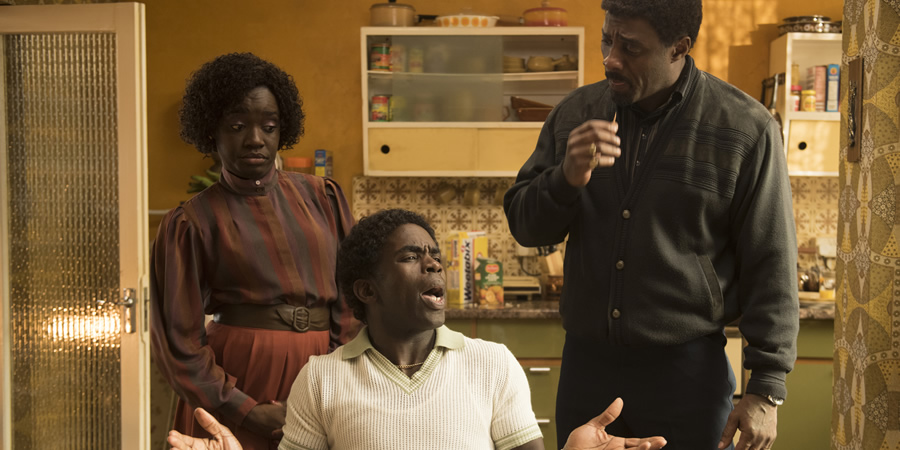 And don't you have connections with Idris anyway?

Yeah! I'm from the same area of London as Idris, I used to go to his uncle's shop, Sam's, in Canning Town. Idris went to Trinity School on the Barking Road, then it was changed to Cumberland and I went to Cumberland School. When I started as an actor everyone was saying to me, "You should know Idris". I was like, "I don't, who is this guy?" And then from working on this job I found out that a shop I used to always go to from the age of around five up to my late teens was his uncle's! And now we're working together. It's so bizarre, we've got so many mutual friends.

Have you worked with Idris before, given all your connections?

No! This is the first time. I had to play it cool obviously. People have said we look alike too - I've not said it to him but the amount of people who've said, "You know what, you remind me of Idris. You guys could play brothers". And now we are.

Does this show offer something of the immigrant experience we haven't seen before?

Yeah, I think it's a ground-breaking show. I think growing up around these times, there was always a big influence from the Caribbean side of things, and Windrush and whatnot. Whereas I think the African side of things has always been a bit missed out. And I feel like now this show has the potential to give a window to the African experience, and that culture. But also what I love about this show is it doesn't matter where you're from: if your family's from Turkey, Poland, Italy, whatever and you came to London in those times you will really engage with this.

You're also playing a DJ. How are your DJing skills?

I love the music part of this show but I can't DJ to save my life! I always thought I could be a good MC and that I might do that. And I used to play semi-pro football, so I've got that side of Valentine covered. In fact there are so many things I have in common with him, like me living between LA and the UK now and having to go to a foreign country and start again there. There are a lot of parallels.