When Vic invites Bob's ex-wife over as a surprise, Bob is not at all pleased.
Preview clips 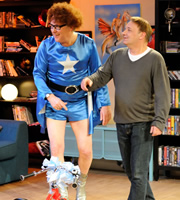 When Vic invites Erika (Bob's ex-wife) over as a surprise for Bob's birthday, Bob is not at all pleased. Unbeknown to Vic, Erika has a death wish for Bob.

Together, the boys agree the only way for them to get Erika to leave, and guarantee Bob's safety, is for Bob to play dead - literally.

With Julie and Bosh in on the facade, they attempt to safely steer Erika back to Norway without her finding out. But as Erika turns out to be a lot more fun than anyone predicted, Bob is left to fend for himself while the others party into the night at his supposed wake.

Bob has never had such a miserable birthday. But there is one more surprise to come...

Vic's stories about Erik's mum don't quite add up.

Bob's hunt for a birthday present takes a depressing turn.