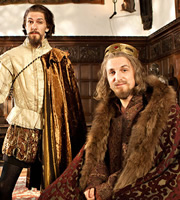 Emperor Napoleon plays in a very unusual chess match, a Victorian inventor builds an anti-seasickness ship with one small design flaw, a snowball fight breaks out at a public execution, and the British army hires a dead tramp to defeat the Germans in WW2.

The premiere broadcast of this episode was shown with wrong credits at the end, including the crediting of Sarah Hadland, but not Dominique Moore or Katherine Jakeways.