There are musical maestros aplenty in the last episode of the current series of the award-winning Horrible Histories. 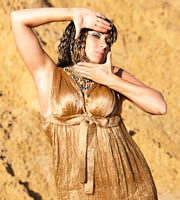 There's a hip-hop battle of the boasting Celts; a musical interlude from superstar songstress Cleopatra; and terrific tunes from rock rebel William Wallace, the soulful Suffragettes, the funky Aztec priests and a crooning caveman.

The silly songs and mirthful musings continue with bad boy heart-throb Dick Turpin, pouting Richard III, the children of the Victorian workhouses and the many merry monarchs.