Some WWI soldiers try some very unusual ways to cure frostbite in the winter. Plus, the not at all romantic movie starring William the Conqueror, the story of Aztec Emperor Motecuhzoma, and a strange Stuart doctor takes a snooze during the middle of a battle. 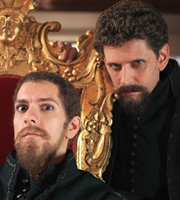 Tanni Grey-Thompson steps back in time to guest star as a sports reporter at the ancient Olympic Games.

Wedding bells are in the air as Horrible Histories rejoices in the strange nuptials of Queen Mary I and Philip II of Spain, and a Stuart groom finds out what his future wife feels about his bizarre arrangements in Historical Don't Tell The Bride.

One-Eyed Bart serves up his pirate feast in Historical Masterchef, there is a visit to Stone Age Dragons' Den and some rather unusual remedies for common ailments are prescribed in Victorian Paramedics.

This episode was originally scheduled as Episode 11, to broadcast on the 12th of July.