James struggles to hold the show together when Mathew Horne is late. Meanwhile, Shovey Mate surprises his friend, mid-urination. 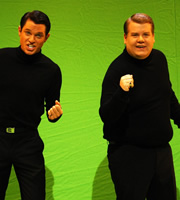 Other sketches include Mathew and James struggling in the World Championships synchronised swimming; Superman and Spiderman have another awkward meeting in the local supermarket; and ace news reporter Tim Goodall investigates knife crime. Apparently Man tells his work mate about the fight he "apparently" got into the previous night, and viewers take a break for an "infomercial" about the dangers of "aspinall".