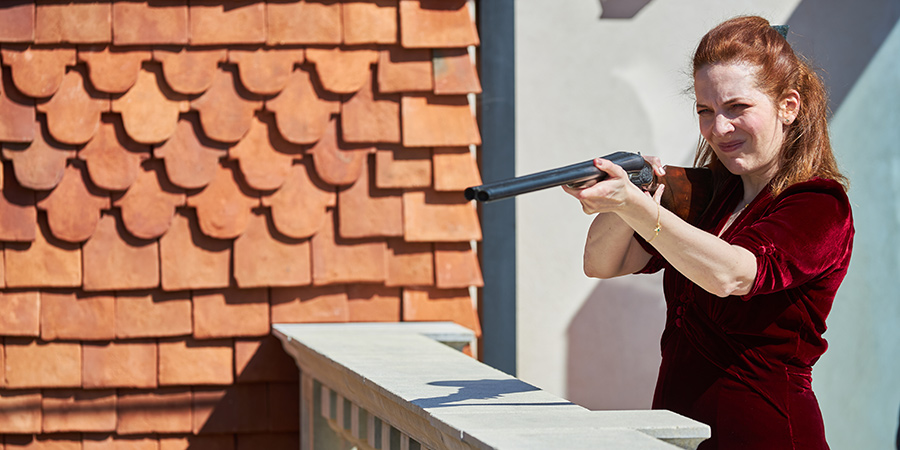 Fran wakes up in Kat's basement, chained to a bed and confronted with a table of computer monitors with live CCTV feeds of rooms around Kat's mansion. Her true intentions revealed, can Fran stop Kat from serving Jamie her last meal?

Fran wakes up in Kat's basement, chained to a bed and confronted with a table of computer monitors with live CCTV feeds of rooms around Kat's mansion. Meanwhile over a sumptuous breakfast, Kat is trying to shut down Jamie's concerns about Fran's lack of contact, before slipping down to the basement and revealing to Fran how all this is the fruition of her masterplan; she has relished being in control of their every move - posing as Mr V, pulling jobs off the dark web, watching them through ingenious tech - and contriving the job in Japan to pull the pair apart. Why? All because Kat believed Fran had "stolen" Jamie's friendship from her as a schoolgirl, and now she wants Fran to endure the pain of seeing her best friend with someone else.

But meanwhile Jamie is getting increasingly suspicious of Fran's apparent rejection, and wants to leave the mansion to look for her. Kat barely hides her frustration but offers to cook Jamie a quick meal, secretly revealing to the CCTV camera - and Fran - that she plans to poison Jamie. By now Fran has managed to unchain herself and is frantically trying to find escape routes. She manages to set off the fire alarm and Kat comes to the basement to confront her with a shotgun. When she sees that Fran has apparently escaped, Kat returns to Jamie, manically insisting that they leave. Jamie escapes and runs for cover in
the mansion's hedge maze. Meanwhile Fran has extricated herself from inside her mattress, and follows them into the maze where a sequence of cat and mouse ensues, culminating in a confrontation between the three. As Kat is about to shoot them both, she chokes on her own poison - it turns out Jamie had switched the plates earlier - and finally their antagonist is dead. We end on Fran and Jamie cheerfully bickering as they try to find their way out of the maze.