AKA: The Hitchhiker's Guide to the Galaxy.  Galactic reference book.   Voiced by: Peter Jones 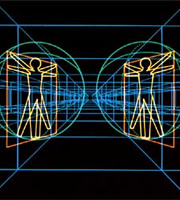 While not technically a character, The Guide serves as the narrator to the series and expands on some of the finer aspects of Galactic society, culture and history. Indeed, many of the most memorable sequences in the series are entries from the Guide.

By its own admission The Guide contains much information that is apocryphal, or at least wildly inaccurate, but what it does have is a cheap price, the words "DON'T PANIC" in large friendly letters on the front and a voice that speaks its entries in a calm and level tone.

Arthur is a six foot tall, carbon-based, bipedal life form descended from an ape. He wanders the galaxy still in his dressing gown in a state of confusion and is constantly perplexed by the events that surround him. To top it off, he is always hit with a fresh shock before he has really had time to recover from the last one and as a result his mind can never really catch up with and comprehend the current situation.

Instead of worrying himself about it all however, he is often more interested in trying to find himself a nice hot cup of tea. Although out of his element, Arthur is generally well-meaning and does his best to lend advice and help in sticky and bizarre situations.

AKA: Real name is only pronounceable in a dead Betelgeusean language..  Researcher.   Played by: David Dixon

Ford is not descended from an ape. He is in fact from a small planet somewhere in the vicinity of Betelgeuse and is a roving researcher for The Hitchhikers Guide to the Galaxy.

Ford originally intended to stay on the Earth for two weeks but was stranded for 15 years, during which he pretended to be and out-of-work actor. He is known for being an unruly boozer and although eccentric, he is harmless in his ways. Ford is quite savvy to the ways of the galaxy and does his best to help out Arthur along their travels, but more often than not encounters difficulty with his friend's lack of comprehension and just gives up.

Entrepreneur, professional party-goer, ex-president of the galaxy, wanted fugitive and all round self-proclaimed amazing guy, Zaphod is essentially "The man" of the galaxy.

Suave, smooth talking, but completely narcissistic and self-obsessed, Zaphod lives on a total whim and does whatever may come into his heads at any given time... such as stealing the starship Heart of Gold at its unveiling while he was Galactic President.

Despite his cool and laid back image, Zaphod is not at all averse to running away and hiding from a problem, nor is he particularly overburdened with an acute sense of morality. Famous for being astoundingly clever, he can also be astoundingly stupid, something which he often covers up by having a dig at Arthur and making him look like a fool. Oh yes, he also has two heads and three arms.

AKA: Tricia McMillian.  Doctor of astrophysics.   Played by: Sandra Dickinson

Trillian has a degree in mathematics and a doctorate in astrophysics, so when she met Zaphod at a party in Islington, she jumped at the chance to see the galaxy... it was either that or back to the dole queue on Monday.

Easily the most sensible one of the group, it is often quite clear that she knows more about what is going on than either Ford or Zaphod despite their Galactic experience. She alone seems to have some amount of control over Zaphod, as well as constantly doing her best to be nice to Marvin, even after everyone else has given up.

AKA: The Paranoid Android.  Robot.   Voiced by: Stephen Moore

Marvin is a 'personality prototype' from the Sirius Cybernetic Corporation's new line of robots with "Genuine People Personalities" and regards life, the universe and everyone in it with utter contempt.

Constantly depressed and extremely sulky, Marvin has a brain the size of a planet and therefore resents the menial tasks he is frequently asked to perform.

AKA: Eddie the Shipboard Computer.  Computer on the Heart of Gold.   Voiced by: David Tate

Eddie is the on-board computer on the Heart of Gold, the spaceship stolen by Zaphod Beeblebrox. Unlike Marvin, Eddie is constantly upbeat and cheerful. Even when the ship is about to be destroyed by two nuclear missiles, he spends his time trying to calm the crew by singing You'll Never Walk Alone.

The head of a Vogon Constructor Fleet, Prostetnic is the Vogon who demolishes Earth at the beginning of the series.

Prostetnic is very typical of his species, in that like most Vogons, his main interests involve shouting orders at people below him, obeying the bureaucratic orders of his masters, and writing terrible poetry.