10 Years of Have I Got News For You guest hosts 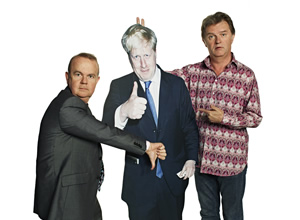 Today, Friday 9th November 2012, marks the 10th anniversary of the first guest host on Have I Got News For You. Time really does fly - tonight's show, hosted by Homeland actor Damian Lewis, will be the 179th episode without Angus Deayton.

The idea of having a different guest host each week presenting the BBC's flagship topical comedy show was initially intended as a short experiment; a way of getting through the remaining scheduled 7 episodes of Series 24 without Deayton, the regular host who had been sacked mid-run as he was still 'the story' in the papers (this was nearly six months after the first News Of The World headline about his private life, it should be noted). However, using guest hosts is the 'experiment' that has endured to this day, even crossing to other established formats - notably music quiz Never Mind The Buzzcocks.

When Angus Deayton departed in October 2002, Paul Merton was the first to take the host's seat. He did so somewhat reluctantly at very short notice, and just for the one episode. The very first official guest host was Anne Robinson on Friday 8 November 2002, with John Sergeant, Boris Johnson, Liza Tarbuck, Charles Kennedy and Jeremy Clarkson taking up the central position later in the series.

It was perhaps Boris Johnson's first episode, a hilarious instalment (not for the expected reasons) - one that is still well remembered now - that cemented the guest host gimmick in the producers' minds. Politics' blond bombshell has in fact now hosted two other equally memorable episodes (and appeared as a guest panellist on another three again), with some crediting his show-stealing performances with his successful 2008 election as Mayor of London.

Other memorable guest hosts brave enough to try to control Ian Hislop and Paul Merton's off-the-cuff wit have included: Bruce Forsyth, who ran a game called 'Play Your Iraqi Cards Right', kickstarting his career again at the BBC; animal lover Rolf Harris, who played the Stylophone; Doctor Who star Tom Baker, who gave a madcap, charmingly unhinged performance; Brian Blessed, who roared his way through a shouty, sweary, infinitely memorable episode; and Ann Widdecombe who couldn't read an autocue for love nor money, and was so appalled by panellist Jimmy Carr's jokes she threatened to walk out.

Of course there are still regular calls for the BBC to install a permanent host (Alexander Armstrong's name is often mentioned) - something to reinstate a certain amount of stability and seriousness rather than novelty - but with the odd watercooler moment still thrown up, it seems unlikely that the show's producers will be heeding the calls.

To date, a total of 85 different people have taken up the guest host's role. Some definitely don't get invited back a second time, whilst others are favourites with the producers and audiences. The aforementioned Alexander Armstrong has sat in the chair the most - 21 times so far.

Hosts who have memorably struggled in the chair aside from Ann Widdecombe include Neil Kinnock, who was given a very rough ride by Labour supporting comedian Linda Smith; Gordon Ramsay who reneged on his promise to buy everyone dinner at Claridge's should he fail to read the auto-cue correctly; and Greg Dyke, who revealed why he normally runs television rather than presents it.

The youngest guest host so far has been Charlotte Church who was just 17 at the time, whilst the oldest is a closely run thing with Bruce Forsyth narrowly beating 81-year-old hosts Nicholas Parsons and William Shatner after he hosted the show for a second time at the ripe old age of 82. Meanwhile, the only double-act to take the hosting role are MasterChef judges Gregg Wallace and John Torode. 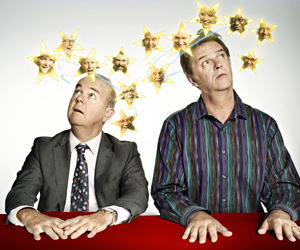 Of course, for many the real stars of the show are still Ian Hislop and Paul Merton. The former is the only person to have appeared in every episode - and in front of every guest host - despite his appendix bursting shortly before one 1994 edition of the show, a condition that meant he had to go to hospital immediately after the recording. Paul Merton has appeared in a majority of episdoes but took 1996's entire Series 11 off and had to miss an episode in 2008 due to a kidney infection (Frank Skinner gave a barn-storming performance in his place).

Talking about the 10 years of guest hosts, Ian Hislop comments: "We've had some classic TV moments with guest hosts. I love the new face in the seat each week. It keeps the show fresh and Paul and me on our toes. Some of the more memorable hosts have included John Prescott, who was great and Boris Johnson who was a revelation. But Sir Brucie, when he did 'Play Your Iraqi Cards Right', it was a low point for British television, but it was incredibly funny."

Paul Merton adds: "I look forward to elements of the animal kingdom being invited to host the show. If I can put one warthog in the presenter's chair then my life will be fulfilled."

Have I Got News For You is currently broadcasting on Friday nights on BBC One at 9pm. Guest hosts still to come during this 44th series include Sir Roger Moore.

Notably, today is not just a memorable day for the show because of the guest host anniversary, it's also a day in which the format could expand. You see, in America tonight a non-broadcast pilot for a USA version of the show is being tried out for the TBS network. Executive Producer Jimmy Mulville is there now to oversee things, with US comic Sam Seder in the host's chair.

Note: If you liked this article, you might also like The Daily Mail's article: Read - their piece includes the news that Jeremy Paxman is regularly asked to chair the show at least once every series, but always says no; and suggests that Ian & Paul each earn around £24,000 an episode.