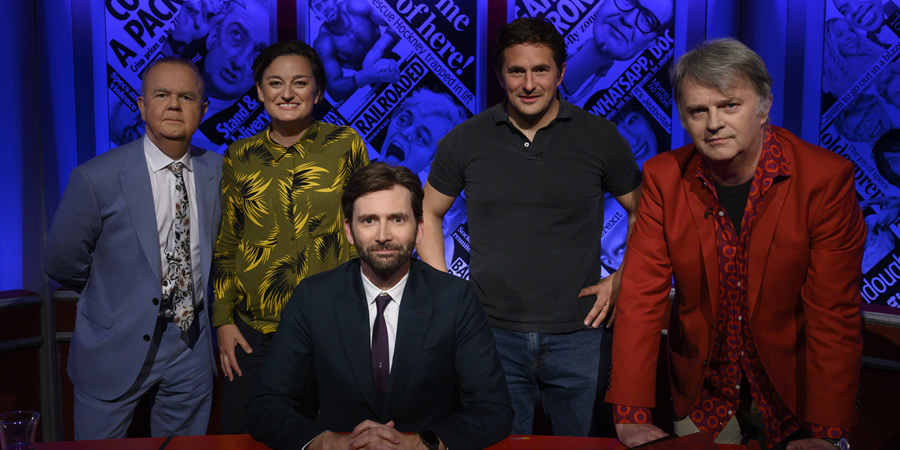 David Tennant steered this week's edition of the programme through the biggest stories of the week, covering the announcement of Donald Trump's state visit to the UK in June, the 16-year-old climate change activist Greta Thunberg's speech to MPs, Ann Widdecombe joining The Brexit Party and a British donkey that is about to become the world's tallest donkey.

During the episode, Johnny Mercer MP alleged that the Deputy Chief Whip had tried to dig up dirt on him, to put pressure on him to vote for Theresa May's Brexit deal in January.

"The Deputy Chief Whip has decided to go and ask friends of mine that I served with in the military whether or not things in my book were correct. When I confronted him about it he claimed that was his job to 'kick the tyres'" Mercer explained, continuing, "When I spoke to my friend he hadn't done anything like that at all - he'd tried to get some dirt and blackmail me to vote for the Prime Minister's deal in January."

"So that's why they did it - to try and force your vote?" host David Tennant looked to clarify.

"Yeh. Nice place, politics. Why did I sign up?" Mercer sighed.

"Why did you?!" joked Paul Merton.

Ian Hislop was also quick to take Mercer to task during the episode about this week's reports about his private salary from Crucial Academy being funded by a company that marketed a failed bond scheme that lost savers £236m. As he has done this week, Mercer defended his position saying he had done nothing wrong, and that the BBC had reported the story incorrectly.

"What bit did the BBC get wrong?" Ian Hislop questioned.

"So I run a company that trains veterans to go into cyber employment and, four companies away from that, is a company that's gone bust." Mercer began to explain. "Yeh, it's not many companies. It's quite a big company. Four people being arrested. Big story." Hislop responded.

"It's a big story but it's got nothing to do with me" Mercer replied. "How does training veterans make enough money to earn you £85,000?" Hislop probed. "Because if you train them in cyber security and they have specialist skills they go into FTSE 100 companies and earn quite a lot of money in cyber security. I look like a right bastard don't I doing this whole veterans employment thing?" Mercer asked, sarcastically.

"No it's not the veterans bit, it's the £85,000 for a four-hour job. Why don't you do it for free?" Hislop queried, continuing, "The people who have lost money out of this company are very cross with you."

"No money went from that company into Crucial Academy" reiterated Mercer. "This is one for Judge Rinder, I think" Paul Merton chipped in, to laughs from the audience.

The teams drew, 5 points each.