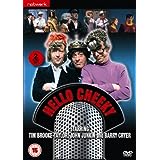 The half-hour shows were recorded in front of a live audience and replicated the original series's trademark mix of preposterous sketches, appalling jokes, raillery and general silliness. Improvisation abounded, with the occasional blunder retained in an irreverent approach summed up by Cryer as "Laugh-In without the gloss, only desperation and rot". A typical show might feature advice on looking after an armadillo, teaching your dog to samba or making your very own space rocket from a yard of lint, an operation on a false moustache, or even a gala dinner with the officers and crew of the Nancie Celeste...

This first-time release on DVD contains all 12 existing episodes from 1976; although 13 were made over two series, the tenth - S02E02 - is missing from the archive.