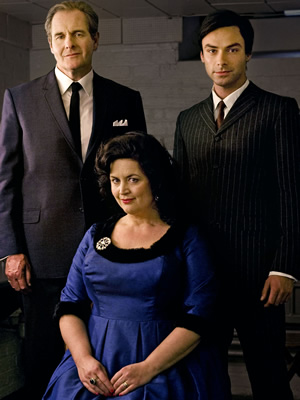 Ruth Jones takes on the role of the larger-than-life Carry On actress Hattie Jacques in Hattie, a one-off biographical film for BBC Four. Based on the authorised biography by Andy Merriman, the drama reveals how her home life was blown apart by a secret affair with a younger man, while she was married to Dad's Army star John Le Mesurier. It was a hot-blooded romance in stark contrast to the matronly roles that made her famous.

Hattie Jacques began her career in the Forties, first gaining attention through her radio appearances with Tommy Handley on It's That Man Again (aka ITMA) and later with Tony Hancock on Hancock's Half Hour.

From 1958 to 1974 she appeared in 14 Carry On films, often playing the matron. She had a long professional partnership with Eric Sykes, with whom she co-starred in his long-running television series, Sykes. She also starred in two Norman Wisdom films, The Square Peg and Follow A Star.

Jacques was married to John Le Mesurier from 1949 until their divorce in 1965. Her final appearance on television was an advertisement for Asda in 1980. She died later that year from a heart attack.

Richard Osborne, from producers Angel Eye Media, says: "We had the idea of doing a drama about Hattie Jacques, partly because we felt many of the TV biographies about comic performers, from that period, were about men. Then we heard Andy Merriman's book Hattie Jacques, The Authorised Biography, was about to be published, so we optioned the book, all in all a very fortuitous time to be telling Hattie's story."

"Hattie Jacques was a true comedy star of her generation so it was a great responsibility as producers to do justice to her story when bringing this warm and generous character to life," adds Richard.

"It's a challenge to put someone's life on screen in 90 minutes. We never wanted to do a "cradle to grave" biopic. Our aim all along was to find a contained story that was worthy of a film, says producer Seb Barwell.

"Scriptwriter Stephen Russell was key to achieving this," continues Seb. "We all agreed to focus on the relationship with John Schofield - and keep within that limited timeframe.

"Steve's great achievement was to convey all the dramatic peaks and troughs and shades of emotion within this episode. He's captured the voices of Hattie and John Le Mesurier beautifully and all the main characters get a fully rounded, layered portrayal.

"One of Dan Zeff's many contributions as director was to stick very closely to Hattie's point of view in the story and really bring out her internal struggles," says Seb.

"Andy Merriman was really helpful with the research for the film. For the book, he interviewed many of the characters involved in the story and very kindly joined us as a consultant on the film." adds Richard 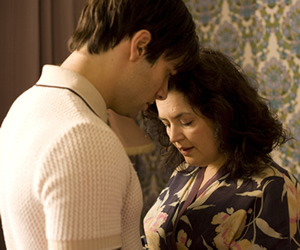 "When I spoke to Robin Le Mesurier, Hattie and John's son, and said that we wanted Ruth Jones to play Hattie, he thought she would be 'absolutely perfect'. We were thrilled when Ruth came on board. She brought incredible insight to the character and was an inspiring leading actress.

"With Robert Bathurst as John Le Mesurier, Aidan Turner as John Schofield and Jeany Spark as Joan Malin, it was a dream team. Each of the actors worked brilliantly at getting the emotional truth of the characters just right. Our firm view was that there were no baddies in the story - just adults struggling with the universal challenge of ending relationships and choosing a life partner," says Richard.

The producers agree: "We hoped to achieve a few things with this film. We set out to show that not all comedians were gloomy men. Later, I think, when we understood more clearly what a warm and generous character Hattie was, we wanted to do justice to the truth of her story and make a film she would enjoy.

"She didn't get the lead roles she deserved in her time, so hopefully we've rectified that a little bit, too!"