Hank is pleased when his mum says he can work in the deli in order to earn a new pair of the latest cool trainers. That's until he's given his latest school assignment: to look after a pretend baby for the weekend. 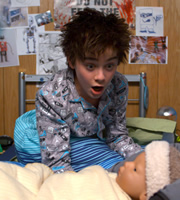 Hank wants the latest cool trainers. At school he's given a pretend baby for the weekend.

Despite his best attempts, Hank finds it difficult to juggle a crying baby and work. He decides to focus on getting the trainers, but disaster strikes when he accidentally ends up swapping his fake baby for a real one - will he be able to sort out the mess, and more importantly get the trainers he really wants?