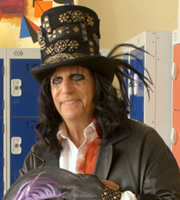 School bully Nick McKelty picks on Hank's little sister Emily. Determined to get revenge and teach him a lesson, Hank decides to make the world's scariest haunted house, with the help of best friends Ashley and Frankie.

Meanwhile, at the deli, Rosa grows increasingly infuriated with Halloween-hating Stan and ends up sending him home, where he discovers the flat turned upside down. At first he's furious with Hank, but once he hears about McKelty's bullying behaviour, Stan agrees to work with the kids to give McKelty the scare of his life.