Series 1, Episode 4 - Battle Of The Goblins

Hank finds himself in trouble when he accidentally breaks his and Frankie's science project. 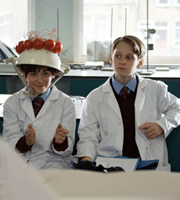 Frankie is disappointed when he has to pick up the pieces rather than collect the latest voice-activated games console which is just launching in store - but is pleased when helpful Hank offers to go instead. However, when Hank fails to get to the store in time he needs to come up with a plan to save his friendship with Frankie - fast!