Series 1, Episode 3 - The Curtain Went Up, My Trousers Went Down

Hank gets the lead part in the school play... a role that the school bully wanted. 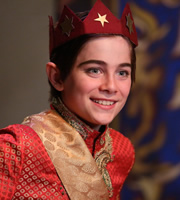 Hank gets the lead part in the forthcoming school play, but with school bully McKelty determined to get the role himself and Hank struggling to learn his lines, it's not as easy as he thought it was going to be.

Things get worse when Miss Adolf assigns goody-two-shoes Heather to be Hank's maths tutor, but to Hank's surprise, things don't turn out quite as he expected...