In the final ever episode, Martin presents a mime at a funeral, Alan and Joanna are on the run, Boyce encounters someone even more vile than Statham, the Office Girls go feral with Karen undergoing a dramatic change of personality, and Caroline finally gets married... but to whom? 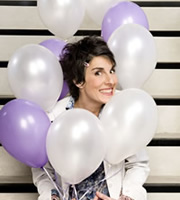 The final episode begins in a church where the hospital staff are attending a funeral. At first it appears to be Mac's funeral however it soon becomes apparent it is actually Angela's (why she died is unknown, but it appears to involve a moose). Martin performs a mime in memory of the deceased and soon after Mac arrives at the church on his bike.

Meanwhile Alan and Joanna are on the run in the camper van after having accidentally murdered Joanna's cousin. How they escaped the cliff hanger situation is unknown. Joanna is clearly once more bored by Alan's company but has no option this time but to put up with it. The camper van couple soon become deadly hungry and resort to such tactics as stealing from shops to get food. It isn't long before their hunger really does turn deadly - they accidentally kill a mechanic and then later Alan accidentally kills a shop assistant in a very botched robbery!

Back at the hospital Mac discovers Caroline is now engaged to Guy, although it soon transpires she's not actually all that comfortable with the situation as Guy is being very arrogant and is un-romantically treating Caroline as his possession to do what he wants with.

Elsewhere in East Hampton's corridors it soon dawns on Boyce how much he misses Alan when the replacement radiologist lecturer refuses to tolerate his euphemisms. Martin is also feeling a little lonely and rejected as Alan and Joanna had pushed him out of the camper van once they'd escaped the cliff. Sue meanwhile is being her usual mad self.

Mac reveals to a drunk Guy that he's dying and it isn't long before Caroline finds out. When she confronts Mac he admits that he didn't pursue the marriage route with her as he thought she'd be better off marrying someone who wasn't dying. Mac is apparently dying of something with an 'A' and an 'E' in it (not acne) - we never find out what, however it is assumed to be cancer.

In the HR office we discover Karen's fall from the window has helped her gain some confidence and fashion sense (although she has lost a hand). It took them some time however the office staff finally twig that now Joanna has gone they're in charge! They begin recruitment for a new male temp and to ensure they pick the right person they include the rather unorthodox question 'can you drop of trousers?' into the interview process. They should have hired a cleaner too - the office looks like stationary bomb has hit it!

Sue spots that Joanna's departure could benefit her too and is soon locked in an argument with Charles Robertson (the Chief Executive of the hospital trust) over why he has not promoted her to the now vacant position of Head of HR. Charles looks rather put off by the squirrel suit Sue has decided to wear.

Back on the road with Alan and Joanna it seems they haven't finished their accidental killing spree - it isn't long before they manage to bump off a policeman... with a peanut butter sandwich (The officer was allergic to nuts).

Caroline, having had enough of Guy's rudeness, sees sense and passionately kisses Mac. Guy decides to do a good thing for once and moves out of the way to allow Caroline and Mac to get married. The comedy then skips to a picturesque stately home's garden where the wedding of Mac and Caroline takes place. It is not without interruptions though - Guy proceeds to josh Mac that he will move in with his new wife as soon as he dies. Martin also stops proceedings to try and find out Mac's first name (everyone coughed when the vicar said it) but he ends up none the wiser.

And Green Wing comes to a close with Alan and Joanna wading into the sea to commit suicide whilst Caroline floats up into the clouds with some purple and white balloons.