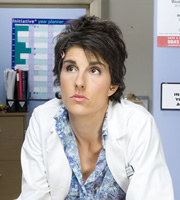 The newest doctor at East Hampton, Caroline has a unique talent of getting herself into embarrassing or awkward situations. Past incidents include blocking Guy's toilet with a "monster that wouldn't go down", getting a pen top stuck up her nose, and her left hand going magnetic whenever there is a full moon.

She also seems to possess a subliminal sexual prowess, with Mac, Guy, Martin and even Sue White on occasion all seeking her attentions. Caroline seems to have her sights firmly set on Mac (well, after much wavering between him and Guy) but that won't stop her being caught up in the most surreal situations around. 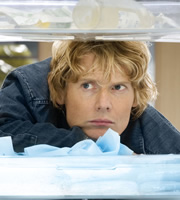 Probably the most popular member of staff - Mac is clever, witty, handsome and, as Sue White says, "has hair like a lion's mane". Partial to riding naked on motorbikes, Mac never knows when to be serious and finds it difficult to express his emotions. However, he is always useful to have in a crisis (unless it's a wasp in theatre), especially when you're hanging off of the edge of a cliff in an ambulance.

He is respected and loved by everyone, although he did have trouble in past with Dr Holly Hawkes after she decided to have an abortion rather than raise a child with him. Much to Sue White's disappointment, he finally got together with Dr Todd at the end of series one... or did he? However, the biggest question on everybody's lips is simply this: just what is Mac's first name? 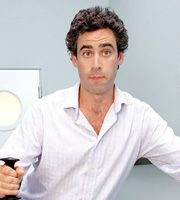 Guy likes to profess that he has it all: the looks, the money, the intelligence, and the way with the ladies. This is despite the fact he has been compared to "the donkey in Shrek", thought 'Kissing In The Toilet' was a George Michael song, and has not had very much luck seducing Dr Todd.

The anaesthetist of the hospital, Guy doesn't really care about anyone except himself and when he's not thinking or talking about women he is attempting to beat Mac in all kinds of bets and games; bullying Martin; and taking on anyone who thinks that they can beat him playing the seemingly unfathomable game of Guyball. 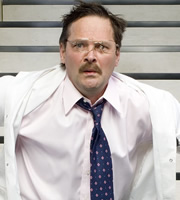 The fussy, bumbling and stuttering consultant radiologist likes to believe he is in control of the hospital when in reality he is just the butt of everyone's jokes. Alan gets upset very easily, and has the worst comeback lines ever. He has a bunch of weird fetishes, including playing his recorder whilst in his boxers, and gets caught in the most bizarre situations (for example when he was comparing the size of his penis to a corpse's).

Alan is completely devoted to Joanna (groping her at any chance he can get). When Joanna once dumped him he turned to Jesus for guidance but that didn't seem to get him far (with the female chaplain anyway). In the second series Alan and Joanna are reunited after they get in trouble with the law. 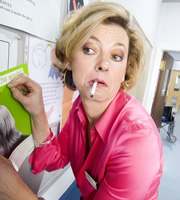 Joanna is the hospital's 48-year-old head of HR. She is (with good reason) extremely worried about getting older and spends a lot of her time exercising and eating healthily (though this won't prevent her from scoffing a huge tray of cakes in the hospital canteen). Her son is discovered later in the series to be Martin who also works at the hospital too, but she tries her best to avoid him - after all, she doesn't want anyone to know she's old enough to be a mum!

Joanna spent a brief while trying to get together with Lyndon in the IT department, but perhaps turning up at his office wearing nothing but a coat wasn't the best way to go about it. She also has a 'secret' on-off relationship with Statham (which the whole hospital knows about). She initially dumped Alan after he became even more clingy than normal, however got back with him when she ended up on the run from the law with him.

She is one of the moodier members of staff, known to bark orders at her staff (not that that scares them into working) and getting... close... to vibrating beds. 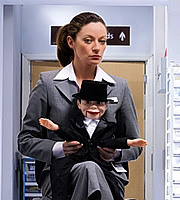 Sue White is the hospital's Scottish staff liaison officer, which is strange because she possibly the least suited person in the world for the job. She once told an upset member of staff to "take that book on dealing with difficult people and f**k off!".

She is foul-mouthed, curel, tight-fisted (she gets all her clothes from the "dead box", which is filled with deceased patient's outfits), sociopathic, possibly even psychopathic, and certainly completely bonkers.

Sue spends most of her time winding everybody up; though she did try to help Martin when he couldn't find clothes to wear for a party (the fact that she choose bright pink combats and a glow in the dark t-shirt for him is besides the point).

The one person she does care for is Mac. Sue would do anything for him - even murder. With Sue around, life in the hospital is certainly never dull. 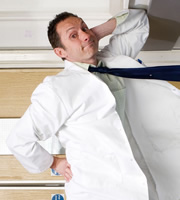 Nothing ever goes right for poor old Martin, one of East Hampton's house officers (trainee doctors). He constantly fails all his hospital exams, his mum (Joanna) tries her best to ignore him as much as possible and he is completely besotted with Caroline, though she sees him as nothing more than a friend.

Extremely shy, Martin is bullied endlessly by Guy and can't stick up for himself... though Mac is always on hand to look out for him. One little ray of hope for Martin is that he's been on a couple of dates with office girl Karen so things may improve for him yet! Also on the plus side, Martin does have a very large penis apparently. 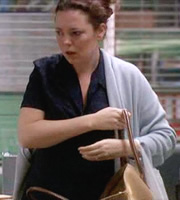 Probably the most stressed member of staff at the hospital, the admin department wouldn't be the same without Harriet bringing in a handbag full of mashed potatoes or wearing a cardigan covered in fuzzy felt animals. Hopelessly absent-minded, thanks to being the mother of three boys (Oscar, Jamie and troublesome Robbie) and wife to the unloving and her never-seen husband Ian, Harriet spends more time on the school run every morning than actually working (this might have something to do with the fact that she sometimes forgets to actually take the kids to school and so they end up running riot in the hospital carpark).

Part way through the first series she falls pregnant again. On the plus side, Harriet has an admirer in the form of Lyndon. 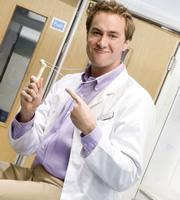 The bane of Alan Statham's life, most of Boyce's time in the hospital is spent winding up the senior consultant and trying to find new ways to suggest Alan is gay (perhaps the most spectacular attempt was projecting a lewd cartoon image on the outside hospital wall).

Boyce once bought Dr Statham for 30p in a slave auction, and they ended up sleeping in the same bed... thus leaving Boyce with plenty more opportunities for homosexual innuendo. 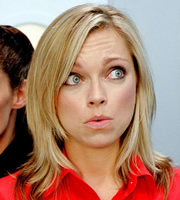 An utter perfectionist, Angela Hunter is the most anally retentive person in East Hampton. Also bright and bouncy, Angela drives Caroline up the wall yet somehow still managed to become her new lodger. However things don't run smoothly between the two, and the tensions escalated when Angela accused Caroline (wrongly) of stealing her knickers because she wanted to be her.

Overall though, Angela seems to have it all: she's gorgeous, she has a great boyfriend and an all-over great life (although she does dance a bit like a wolf). During Series 2 she moved to Canada to become a film star - if you want to know what happened next, you'll have to watch the final Special episode. 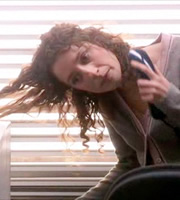 The odd one out in every situation, Karen never seems to smile (or in fact show any extreme emotion) and this makes her invisible to everyone else or just a target for their teasing. Another member of staff to get herself into embarrassing situations with amazing ease, one of Karen's more memorable moments was when she somehow got her hair stuck in the printer (but of course even that didn't faze her).

Karen was completely obsessed with Martin, however it was unrequited love until Series 2. However, by this point she tired of Martin.

At the end of Series 2 she falls out of a window, bringing about a drastic change in her personality. 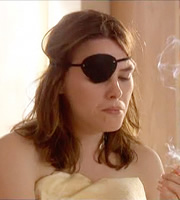 Another one of the admin staff, Kim is loud and never afraid to speak her mind. She seems to be given most of the work from Joanne but that doesn't stop her from playing games with the rest of the HR staff. She is currently embarking on a relationship with Boyce - hopefully this boyfriend won't get his sperm in her eye. 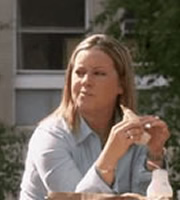 One of the admin staff at the hospital, Naughty Rachel has been given that name for a good reason (after all, she "always f***s on the first date"). Not known for her modesty, Naughty Rachel enjoys weighing her breasts to see how much it would cost to post one to various countries. She also regularly torments Karen.

Head of IT.   Played by: Paterson Joseph 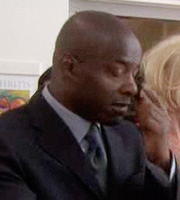 You've got to feel sorry for Lyndon Jones. He tried to quietly get on with his work in the IT department, but ended up unwittingly getting caught in a love triangle between himself, Joanna and Dr Statham - though he never had any interest in Joanna whatsoever.

Lyndon has been bought by Joanna at a slave auction and even had Joanna practically naked in his office!

Lyndon tries to keep himself to himself, so we don't know too much more about him. One thing we do know is that he has a fondness for large underpants, which lead to him having a relationship with Harriet.

Holly was Mac's girlfriend for six years, but that relationship stopped after she decided to have an abortion rather than have raise a child with him.

In the second series she arrives at East Hampton replacing Angela, and has a surprise in store for Mac - she did not have an abortion and has a son called Mackenzie who has hair that looks an awful lot like Mac's. However, Sue discovers that there is more to her and her child than meets the eye.

Jake Leaf works at East Hampton as a complementary therapist, working with techniques such as acupuncture and primal scream therapy. He often gets visited by the likes of Statham and Joanna.

When Caroline learns about Mackenzie, it appears that Jake might be a possible substitute for a love interest, although not if Guy can help it. Jake's notable achievements include being the owner of a tamagotchi which is 12 years old (at least it was before Caroline got her hands on it).