Steve Carell reveals how he almost lost his nipples; Kristen Wiig says no one has asked her to be a bridesmaid; Chris O'Dowd talks about his wedding; and Josh Groban performs live in the studio.
Preview clips

Steve Carell, talking about The 40 Year Old Virgin, and the famous chest hair waxing scene, says, "I thought it would be funny for the guys watching it because there is no way you can replicate the horror you're witnessing or the joy of watching another man go through something like that, but Romany Malco had to leave the room because he was so utterly grossed out my the whole thing."

Revealing how the scene nearly went horribly wrong, he says, "The actress said she knew how to wax. She said she was proficient but it turns out she had once tried to wax her boyfriend's back and that hadn't gone well. You are meant to put Vaseline around the nipple because wax is so viscous it will rip the nipple straight off. She did not do that, but luckily someone shouted 'hold on, hold on' and it's the only time we cut and I still have two fully functioning nipples."

Talking about the Despicable Me movies and asked where his character Gru is from in terms of accent, Steve says, "I have no idea. It's not really an accent it's more of an essence. It's sort of Eastern European, Latin American and Hawaiian. Someone once described it as Ricardo Montalban meets Béla Lugosi. I set the bar so low for myself that I can never do it incorrectly. A dialect coach would screw it up and it would become legitimate - it's supposed to be silly and stupid. I played around with a few accents at home and my kids and wife said it was the one."

Steve will not be drawn on rumours that the likes of Harrison Ford, Liam Neeson and Nicole Kidman might have guest roles in the upcoming Anchorman 2, in which he stars with Kristen Wiig, "We can neither confirm or deny. We think not saying anything about the movie is the best way to promote it!" But, talking about Kristen's slightly dodgy 1980s look in the movie, Steve says, "I have to say doing those scenes with her, looking like that, there was a level of attraction to the character - I thought she was sort of weirdly hot."

Kristen, talking about her parents, who still don't quite believe she is doing okay as an actress, says, "They'll make comments when I do a film like, 'That's so great. So, will it be in theatres?' Sometimes they don't quite understand that I do have a job." Steve interjects, "You know how to settle that? Buy them a house and then they'll be like, 'Oh, Okay. That works for us. That makes sense now, you're legitimate.'"

Asked about Bridesmaids and whether it was based on her own experiences, Kristen says, "Not as much as you would think. I've never lost control of my bowels. It's not that much like me," adding, "No one's asked me to be a bridesmaid since the movie."

Talking about lying on her CV about her skills, Kristen says, "I said I could dance for an audition and when I turned up in my sweat pants all the other actresses had buns and leotards and were stretching. The director told me to rise up from the ground like flames. All I could do was crouch on the ground and sort of do a full turn in the air with my arms. I did half of a spin. It was awful and so humiliating because they seemed genuinely mad with me!"

Chris O'Dowd, revealing he too has lied, recalls working in a call centre in his youth, "I was working on a campaign for endangered wildlife and it turns out no one cares about bats being endangered so for about a month there were people across England terrified about the disappearance of the Bengal Tiger Swan. And they would be like, 'I've never heard of it', and I'd say, 'because it's rare, that's why I am calling!' We raised about £300,000 on that campaign, but I did get fired."

Chris, reminded of his marriage proposal to Dawn Porter, says, "I had planned it and it was all good. Proposing is quite weird. It's so unnatural because you are stepping out of your normal behaviour. We were in Guernsey and were telling her aunt and uncle the story of where I had proposed and from my description he said I had in fact got down on one knee in front of a slaughter house, which I think was pretty appropriate." Talking about the big day itself, he says, "We really had a fantastic time. If I've one regret, I wish I had drunk a little less because I really don't remember much after midnight."

Talking about the accent he adopted in Dinner for Schmucks, he says, "There was no accent on the page so I went for I went for Hungary, but in rehearsal it began to be a bit 'Boraty', so the day before we started filming I made it Italian. I asked the dialect coach, after I had done one or two scenes, what she thought of it, and she said, 'I love it, its like taking a road trip of Europe!"

The chat is interrupted by the entrance of an unexpected guest - a rather large fly, making a loud and sudden fly past, "It was like a bird," says Kristan. After Steve demonstrates how he will kill the persistent insect if it returns, Chris almost swallows it after it lands in his drink and he mistakes it for a lump of ice. Realising there is no hope for the tiny visitor, after being half chewed, Steve performs last rites as a disbelieving and horrified Kristen looks on. 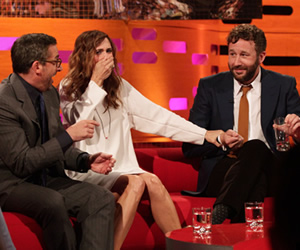 Josh Groban performs I Believe When I Fall In Love It Will Be Forever live in the studio, before joining Graham for a chat about his new album.

Chris O'Dowd talks about one of his early jobs.

Steve Carell talks about the chest waxing scene in The 40 Year Old Virgin.

A massive fly invades the studio

An un-expected guest joins in the show. Chris O'Dowd gets to know him quite well.