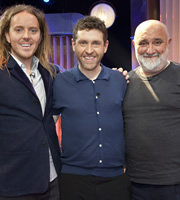 The Wheel of Dice

- In their 40s: We should do away with the Moon. Not a genius

- In their teens: Transport as improved by Einstein's theory of relativity. Not a genius

- In their 60s: A system to lower the weight of lorries which carry large tonnages of budgies. Put a goshawk in the lorry so all the birds fly up and so do not weigh down the lorry. Genius

The judges have to guess which of three people have the idea of a mobile pub. The other two have different ideas.

- A karma machine which causes bad things to happen to people who have down bad things. Not a genius

- Hamster balls for larger pets. Not a genius

- Tim picks a fisherman, which relates to contestant Mark Fisher and his idea: All large crowds should have a Where's Wally? look-alike in them. Not a genius

- Alexei picks a cow in the sea, which relates to Mel C, which is wrong.

- Tim picks the condiments, which relates to contestant Marie-Louise Brown and her idea: Up-lit people to make them look nice. Not a genius

- Alexei picks a tap, which relates to Farrah Fawcett, which is wrong.

- Tim picks an organ, which relates to Cara Organ and her idea: Decimalised time. However this is the twin idea shared with Dave Cassar and Tim loses all his points. Not a genius

- Dancing shoes which download dances from the internet so the shoes dance instead of you. Genius

- Turn the London Underground into a lazy river. Not a genius

- Nemesis finders as an opposite to a dating agency. Not a genius

- The Neanderkit - an escape kit for the modern caveman. [Not a genius

Dave Gorman is joined by comedians Tim Minchin and Alexei Sayle, as they test the idea for a musical instrument for pensioners - the harmonica dentures, which get Tim and Alexei dancing.