Stand-up Chris Addison and one half of Mel and Sue - Mel Giedroyc, act as the judges for tonight's show. Ideas include a machine that can simulate a person's handshake to a discreet device for fixing wedgies.
Preview clip 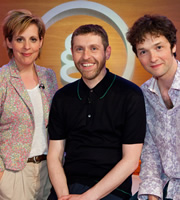 Ideas selected from a random light which shines on a random member of the audience.

- Improve coverage of the Olympics by have an extra lane which would feature an average member of the public in it. Genius

- An aftershave which displays the intelligence of the wearer. Genius

- A soft drink market for the people of Congleton called "Um Bongleton". Genius

- Resurface all of Britain's roads with fitted carpet. Not a genius

- House hats to reflect what was inside. Not a genius

- Pre-flavoured meats so you do not need to add herbs and spices. Not a genius

- Dust-buster cars to clean up the roads. Genius

- Cheese slice dispensers. Not a genius

- Baby dummies shaped like a breast. Not a genius

- Weighing scales for breasts, so breastfeeding mothers would know which breast had the most milk. Not a genius

- An anti-wedgie device to stop your underpants getting into your backside. Genius

- Save the polar bears by establishing a breeding colony on Jupiter's icy moon Europa. Genius

- Get a large sheet of blue plastic with grey edging and fool Google Maps into thinking you have a swimming pool in your back garden. Genius

- Canary badminton. Not a genius

Dave Gorman reveals a novel way to remove a wedgie to Chris Addison & Mel Giedroyc. This involves the guests getting up close and personal with a man's pants.