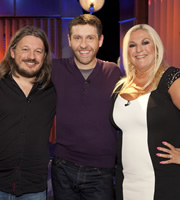 The Topic Machine - Flora and Fauna

A random machine selects a topic, in this case anything to do with nature.

- Eat endangered species. If you did, people would want to keep species alive so they could keep eating them. Genius

- Sheep Scrabble: Spray letters on sheep so they would walk around and spell words. Genius

- Job interview glove puppets to ease interviewees. Not a genius

- The Chin-Strap Pause Button: If you fall asleep during a film, your head would fall and the button would press on your chest, pausing the film. Genius

- Nacho hands: Gloves with nachos on them so you do not have to keep going into a bag to get them. Not a genius

- Standardised hand signals for motorists. Not a genius

- Wheat-biscuit architecture: make buildings out of wheat-biscuit foods like Weetabix. Not a genius

- A new magazine called Puddle Monthly. Not a genius

- Put weighing scales in lifts to encourage people to use stairs. Not a genius

- Rate everyone's attractiveness from 1 to 9, and then you can only have a relationship with someone if your total attractiveness adds up to 10. Not a genius

- To save money sending Christmas cards, put no stamp on them and a false address. On the back write: "If undelivered send to..." and put the actual address on the back. Genius

Guest Ian explains his genius idea for a 'chinstrap pause button' allowing you to pause a film the second you fall asleep!