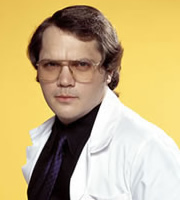 Garth Marenghi is a cult horror novelist, and the creator of Darkplace.

After working briefly in advertising, a 25-year-old Garth published Slicer, a book about a flying knife. It became an instant bestseller. His following two novels, The Ooze ('can water die?') and Black Fang ('rats learn to drive') secured his reputation as one of Britain's foremost writers of horror fiction and allowed him to take up writing full time. Since then he has published at least one new chiller a year, from creatures such as Crab! to more lyrical works such as Tomb Boy and Stump.

Marenghi has also taken his unique brand of horror to the stage. Inspired by nineteenth century French Grand Guignol Theatre and the panto he saw as a child in Mile End, he created a chilling experience that mixed 'inimitable grim vistas and gore in equal measure'.

As we find out through the interview segments and during his introduction to each episode, Marenghi thinks of himself as a genius 'wordsmith'. He doesn't seem to have twigged that most people think he is an idiot and his books are nothing more than a waste of paper. Pompous and infuriating, Marenghi is actually the epitome of a bad author who thinks he is better than he is. Although it is now the 2000s, Garth doesn't appear to have updated his wardrobe.

Showing his vanity has no bounds Marenghi cast himself in the lead role of his TV series. He plays Dr. Rick Dagless, a maverick doctor haunted by the demons of his past, who must now fight an everlasting battle with the forces of darkness whilst dealing with the burden of day to day admin. Apparently Dagless is an ex-warlock, having renounced the occult in favour of the stability of a medical profession. 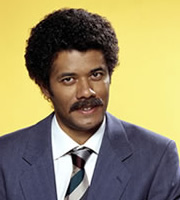 Dean Learner is Garth's manager, publisher and publicity agent. Dean's background is in 'high-class erotica', but he made the move to horror some time ago to pioneer the 'scary porn' genre (where he oversaw such releases as Bitches in Blood, and Spider Pussy). Learner was the first person to have Garth's books published. As he explains in one interview: We never had a contract. I just bared my chest and said, Sign here. That's the only signature I'm ever going to ask you to make in my presence. In retrospect, I should've got something that put me on a surer legal footing

Garth and Dean had a fall out in the 1980s over the financial collapse of Darkplace. Marenghi took his business to a new manager, but the union was cut short when the latter was found shot dead in his flat shortly after their first power-lunch. After this tragic episode, Learner and Marenghi reconciled their differences and are now inseparable.

As well as his work in the publishing business, Learner recently re-opened his club, Dean's, in West London. He has never married, but has been engaged twenty-nine times.

As they were making Darkplace on the cheap, Learner played the role of Dagless' boss in the series (to save paying a 'proper' actor). Thornton Reed is a professional ball-buster. A former POW in Korea forced by his injuries into pushing paper behind a desk, he longs to be back on the ward with the young bucks. 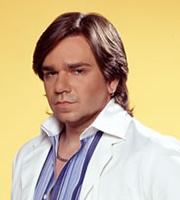 Todd Rivers is the star of over sixty horror films. He was the bright B-movie hope of his generation, until drink and womanising took its toll. Recent appearances in The Bill and Holby City, however speak of an actor returning to his best form (well, that's what he says). An accomplished rock singer/songwriter too, Rivers is perhaps most famous for his Lucky Dip LP, featuring the tracks Hot Woman (When You're Going Down) and One Track Lover (the latter of which was used by Marenghi in Episode 6 of Darkplace).

Rivers took on the role of hot-shot surgeon Dr. Lucien Sanchez in Darkplace. According to the scripts, Dr. Sanchez served alongside Dagless in 'Nam'. A student of martial arts and Eastern lore, he has pledged a sacred oath to uphold justice, which he does his best to keep.

Madeleine Wool was the main actress in Darkplace. An enigma of enigmas, her history is wrapped in secrets (partly because no one ever asked). Apparently she is one of the best animal impersonators of this or any other age.

Madeleine doesn't feature in any of the modern interviews and she is currently missing and, one can only presume, dead.

The character Madeleine played, Liz Asher, is a doctor with psychic powers. Liz joins Dagless's team after seeing hell opening beneath Darkplace Hospital. Able to perform stunning feats of telekinesis, Liz is nevertheless afflicted with emotional instability (according to Marenghi, like most women).