Word gets out that it's Howard's birthday, and Candice insists they throw him a party. Unfortunately, not everyone sees the gathering in quite the same terms.
Preview clips 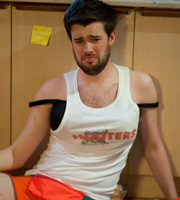 It's Howard's birthday, not that he's told anybody. But word gets out anyway and the housemates agree to throw him a party at Candice's behest.

However, after getting a taste for politics during the sit-in, Oregon is keen to hijack the whole event and make it into a political fundraiser for her own campaign to become President of the Student Union... Which is in turn being hijacked by Vod who's desperate to be her campaign manager, even though her knowledge of politics is absolutely zilch.

A fight breaks out between two of the housemates which results in total ruination of the kitchen.

Howard does not want a party.

A message from Director of Communications (Vod), on behalf of Student Bodies President candidate Oregon Shawcross.