The housemates get radical as they participate in a university sit-in which Oregon has organised to demonstrate against the forced deportation of a hot Tunisian guy.
Preview clips 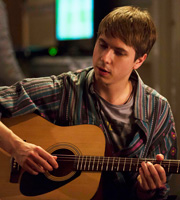 Oregon has organised a sit-in to demonstrate against the forced deportation of a hot Tunisian guy.

Her motives are questioned but Josie doesn't even get to go as Sabine holds her hostage to a PhD crisis she's having.

Vod has an unusually illuminating therapy session which goes well beyond the designated fifty minutes, while JP's attempts to impress Sam are beginning to backfire.

Oregan stands up to injustice.