Having been rejected by Sam for cheating in the quiz, JP makes it his mission to win her back. Meanwhile, Kingsley makes himself ill with worry about telling Josie the truth...
Preview clips 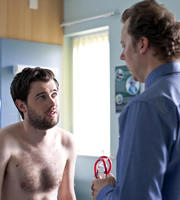 Having been rejected by Sam, JP makes it his mission to win her back by signing up himself and some of the other housemates to take part in a medical drugs trial which he knows she will be attending.

A guilt ridden Kingsley thinks this might be a secure place to come clean to Josie about having two-timed her, but he has failed to take into account his raging hypochondria.

Meanwhile Howard finds himself involved in a dispute with a fellow student over an obscure library book which leads to him being challenged to a fight.

In the quiet of the house, Oregon is rehearsing a play she's written... but when Vod returns home early, she discovers that Oregon has not had to look far for inspiration.

This Play Is About You

The gang are set to take part in a medical trial... but Vod is not too keen on being there.

Howard's training video from his fight preparations. Montage and all.