It's the start of the Spring Term. Paul Lamb, the invisible housemate, has now moved out, so the group are charged with the task of finding a replacement. 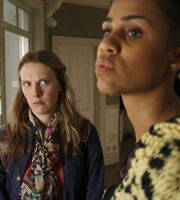 It's the start of the Spring Term and Kingsley has come back with a new image - he's grown a soul patch and started yo-yoing.

Josie too is turning over a new leaf by making friends with Heather, a girl from her course and a self-styled 'mental dental'.

JP's great friend from Stowe, Giles, has transferred from Exeter, but he has some big news which is about to shatter JP's world.

Oregon's relationship with Tony Shales is now over, but she's swapped horses, and is now gearing up to become Jean Shales' new intern, hoping to make a big splash in the dog-eat-dog world of contemporary poetry.

Vod is skint. She owes everybody money and is trying to pay them back in Nectar points.

Howard is moonlighting in the local abattoir and has started to bring home loose meat - 'jazz meat' - to the consternation of all the other housemates.

Paul Lamb, the invisible housemate, has now moved out, so the group are charged with the task of finding a replacement. Despite their best efforts they are eventually saddled with Sabine; a 29-year-old PhD student from Amsterdam, who is clean-living, straight-talking and sober!