Kingsley admits his virginity to Josie and agrees to lose it with her, but has sex with Ruth first. 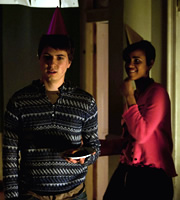 Kingsley is forced to confess to Josie that he is a virgin, and she offers to 'cure' him. But the deal is undercut when Kingsley unexpectedly winds up having sex with drama queen Ruth. Unable to fess up to Josie, Kingsley nevertheless goes ahead with the plan.

Oregon is unimpressed with Shales's cheap efforts at romanticism at a Travelodge while Vod is forced to actually do some work and has an epiphany; enjoying the book she was meant to read.

JP takes Howard under his wing in an attempt to "humanise" him, but becomes increasingly dependent on him when they go on an expedition to acquire illegal substances...