After slagging him off to Vod, Oregon ends up having sex with Professor Shales. 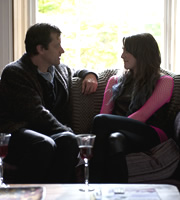 Oregon and Prof Shales's flirtation reaches bizarre new levels when he pays her to clean his oven.

Josie enrols the other housemates in a charity dating scheme and is devastated when her date fails to show, although it later emerges he died shortly before, and she finds herself mourning the death of the potential partner she never met.

Meanwhile JP worries that he might have forced himself upon his charity date, and Vod and Howard, suspiciously paired with one another, go on a date to an all-you-can eat buffet...