The housemates move in. Josie sleeps with JP despite fancying Kingsley. 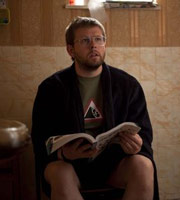 One by one, the six new students destined to be housemates congregate before term begins - although second year Howard has of course already been in solitary residence for some unspecified time.

There are already some surprises in store: to his considerable bemusement, Kingsley manages to pull at the pub, but to his dismay finds the object of his attention is in fact recruiting for her Christian group.

Oregon wastes no time locking horns with her lecturer, Professor Shales, at her first English tutorial - although is startled to find she has also allowed Vod to claim ownership of her first essay. And Josie ends up in bed with JP - a random encounter after which, to her horror, she realises he is in fact there to stay.

Still, at least Howard is able to relinquish his outcast status - an accolade now awarded to the mysterious Paul Lamb - "the invisible man".