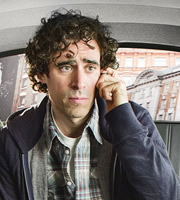 Alex has a lot to be thankful for. His health, for example. Growing up in Twickenham rather than, say, Baghdad. And the tiny sofa in his poky office... he's pretty thankful for that as he's been calling it home ever since he left his wife and children!

Stuck in the middle of a painful divorce, Alex is clinging on to his job at successful talent agency TMA, run by his sex-obsessed, cocksure and roguish boss, Stephen. He's penniless, homeless and last week he burst into tears in Sainsbury's because for a second he imagined he saw his kids by the meat counter.

Despite all this, Alex has managed to hold onto his sense of humour. It's a rather dark and twisted sense of humour that only Helen seems to find funny but hey, it's all he's got. Apart from a couple of pairs of jeans, he's got those. And his iPod. And a beaten-up old Mercedes which just failed its MOT.

Alex has a motto: "Just pretend the shit's not happening and get yourself a girlfriend." Because when you've got a girlfriend you just feel better about everything. Alex is hoping that his motto's as true now as it was when he first came up with it when he was fifteen. 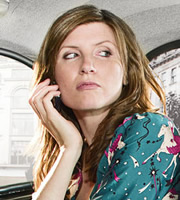 Helen is coping really well with the after-effects of her own personal trauma. It's almost a year since her boyfriend dropped dead, just months before their wedding. But time has passed, she has a nice flat and, unlike Alex, she's successful at her job in the talent agency. She's getting her act together. She's just wishing she hadn't celebrated the anniversary of her fiance's death by sleeping with Alex.

Helen is a strong, intelligent woman. She knows that there are support groups that can help the bereaved. There are therapists and counsellors. But let's face it they're pretty much all tossers so she's just been drinking a lot of red wine. That seems to help alright. That and hanging around with Alex who is clearly in even more shit than she is. Knowing that however bad she feels she doesn't feel as bad as Alex does, makes her feel lucky and that her life is so much better than she thought.

In any case, Helen knows that things are going to get better. She knows that because three different mediums and a viking Rune-caster have told her so. As long as she never walks under ladders and avoids single magpies, nothing bad will ever happen to her again...

Helen is not looking for a boyfriend. She really isn't. And even if she was, she wouldn't be looking for one who cried after having sex with her. Twice. 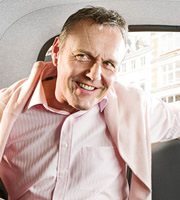 Stephen was educated at Eton College (expelled), read English at Trinity College Cambridge (sent down), before taking up a commission in the Argyll and Southern Highlanders (reduced to the ranks for an incident at the Summer Ball involving his commanding officer's wife. And daughter. And the daughter's best friend. And the regimental goat. Although Stephen has always maintained that this is a fabrication - the daughter's best friend was not involved as she was actually on the other side of the parade-ground sucking off a subaltern)

At 22 it's fair to say that Stephen had revealed himself to be a ruthless scoundrel completely without morals and possessing all the sexual responsibility of an alley-cat. Just what you need for a successful career in showbusiness.

Rising quickly through the ranks at CMA, he was married at 24. Then again at 25. At 28, 30 and 33. By 45 he'd stopped counting to be honest. Let's face it, some of them weren't even marriages so don't really count. Not in the eyes of the Church anyway. There were children involved. All very dear to his heart but as far as details like names, ages, boy or girl etc it's probably best to ask their mothers.

Stephen's hobbies include: getting married and having children. Sexual experimentation. And golf. 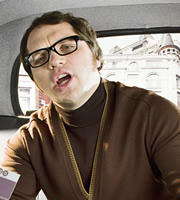 Dan Mackey was born. And he lives. That's all you need to know. According to Dan. As he puts it, whatever the year it was that his mum shat him out, he came out the womb prepared to do anything for his clients. Before he even had any clients. That's how committed he is to them. And was.

School and holidays and Christmases and birthdays and having to live with his parents and his disabled sister was just time he wasted until he was old enough to get out there and sign the talent.

He started in the postroom at CMA - just like they do at the American agencies. In truth they didn't actually have a postroom at CMA for him to start in, they were perfectly happy for him just to be an assistant and leave the post to the girl on reception but he made them start one and put him in it so he could fight his way up the fricking ladder from the very bottom. Like they do in America..

Dan can't wait to get to be an agent in America. That's the dream. As far as he's concerned America's the Premiership and it's like at the moment he's playing in Ryman League South. Or at best the Vauxhall Conference. Not that he even likes football.

He's got no time for women. Girlfriends are for pussies. He'd be quite interested in having a kid with Emma though. Because she's an agent and so is he, so it would be like a dog-breeder or a horse-breeder putting two dogs or horses together and making them shag and getting a super-horse or super-dog. Though in this case it'd be a little super-agent that Emma would drop. Hopefully looking like her. Especially in those jeans she wore to the Xmas party. 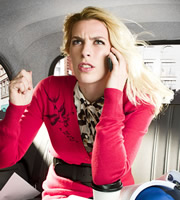 Emma first came to CMA on a week's work experience but she impressed Stephen so much in that short time he asked her to stay on permanently. Or to put it another way, Emma told Stephen either he gave her a permanent job now or she'd tell her dad, who is a lawyer, about the thing he asked her to do in the lift with the girl from accounts. She started the next day.

Emma has an interesting interpretation of what it means to be an assistant. She has a healthy disrespect for authority and absolutely no respect for people like Alex who have no authority whatsoever.

She knows where the bodies are buried at CMA. She knows that when she tells clients that Helen is in a meeting at the BBC she's actually in bed with a hangover. She knows that Alex is afraid of her and Dan fancies her. And she's been collecting dirt on Stephen for a while now for when she feels it's time for a promotion, which is going to be any day now.