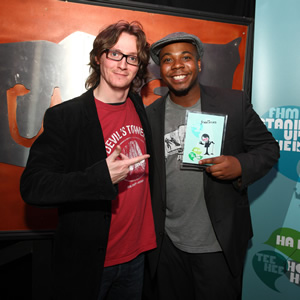 2009 Stand-Up Hero winner Marlon Davis reveals the impact the competition had on his life...

"It's been crazy. I've got into the bigger clubs, I've been overseas and I've played at some of the biggest festivals around", he says. "I've just signed to one of the biggest agencies in the country - they look after Jonathan Ross, Jack Dee and Lee Evans. These are people I've looked up to, and now I'm on the same roster... I've been able to leave my office job, I've been on Radio 4, I've taped a set that's going to be on Comedy Central. The competition has helped a lot. I was a comedian, but Stand-Up Hero has put me in the spotlight over night. Comedians are talking about it now, not just because of the money, they've seen what's happened to me."

Speaking about the competition, Marlon, who hails from Harlesden in North West London said: "It does get competitive. That's one of the hardest things, seeing that you're competing against people you think are really good. When you're hanging around backstage, you're talking to people, then you wish them well before they go on, but not too well..."

Offering some advice for this year's candidates, Marlon added: "Some people have little things they do before a show - some might have a drink, others like a meal, or maybe their own space. Me, I wear odd socks, that's what I do. But the main advice I'd give would be to get yourself a notepad and a dictaphone, try and get five minutes of material. But most importantly, be yourself and make sure you're having fun."