Richard Griffiths and Benjamin Whitrow give hilarious performances as Jack and Hugo - the co-directors of an upmarket wine merchants that is decidedly on its uppers! Congenitally work-shy, the two perpetual partygoers get a considerable shock when the company accountant unexpectedly dies and they discover that they're completely strapped for cash! When the bank installs a troubleshooter to save them from bankruptcy they're faced with the ghastly realisation that they may well have to stop partying and start working for a living...

Written by BAFTA-nominated writing team Richard Fegen and Andrew Norriss - who had just finished their highly successful run on Chance In A Million and who would go on to even greater success with Woof! and The Brittas Empire - this set contains all twelve episodes from both series. 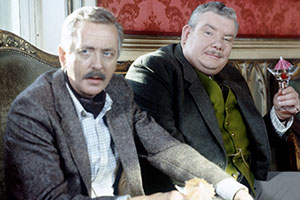 To start British Comedy Guide and Network's Month of Comedy, we look back at Fegen & Norriss sitcom Ffizz.