The balance of the Whyte family household is rocked when Elaine makes the surprise announcement that she thinks she might be pregnant. 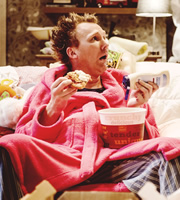 Tom has not taken the news of the two previous pregnancies well in the past, having found the idea of being a dad somewhat overwhelming, so Elaine is concerned at how he will react this time. All seems to be fine until inexplicably Tom starts having food cravings and putting on weight.

Dad Tom is not the only member of the family struggling with the news - son Drew is anxious about a new arrival and asks his grandad Pat to explain where babies come from.

Roddy, meanwhile, thinks it's time he got back into the dating scene, and takes to the internet looking for love.