Tom attempts to go back to basics and force some good old-fashioned fun on the family.
Preview clips 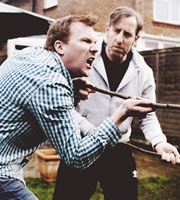 Tom hates his family's dependence on gadgets, and decides to hide any technological equipment so that the family are forced to start using their imaginations more. However, his family fail to see the point and are without exception all furious at the decision.

In the face of this opposition, Tom and Roddy try to show the children what it was like to play with sticks before the invention of computer games - and aim to show them how to unleash their imaginations.

While his sons struggle to adapt, Tom's parents, Pat and Mary, soon discover alternative ways to pass the time.

It looks as though Tom might be winning through until he discovers what's happened to his gadgets and Drew is in trouble with his headmaster.

Tom declares war against his neighbour Tim and gets slightly carried away.

Pat suggests to Mary that they should maybe put the telly away for a while.