Tom is first to admit he's no domestic God, but when a national competition to find The House Husband Of The Year is announced, he is dragged into a rigorous training schedule.
Preview clips 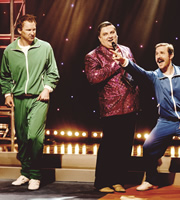 With his competitive mother Mary as his trainer and the assistance of Pat, Roddy, Elaine and his sons, Tom eventually finds his inner Mammy and goes head-to-head with his neighbour Tim in the gripping final.

But, as always in the Whyte family, things don't run quite to plan and a surprise outcome in the final could see Tom's hard work scuppered.

Mary gets Tom in touch with his 'inner mammy' the hard way.

Tom takes on Tim to be the House Husband of the Year.