Tom invites his timid neighbours Helen and Brendan over for a relaxed dinner party to say sorry, after previously causing them minor injuries in a disastrous incident with the barbecue.
Preview clips 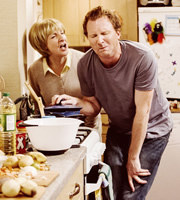 Tom invites his timid neighbours Helen and Brendan over for dinner to say sorry, having caused them minor injuries in a barbecue incident.

However, chaos is never far away where Tom is concerned and his family are convinced things will go horribly wrong with him at the helm.

With the arrival of best friend Roddy, who brings along his own interpretation of dessert much to Tom's dismay, and his parents unexpectedly descending on the house, Tom feels that the whole world is conspiring against him getting the meal ready in time.

Things take a turn for the worse when wife Elaine arrives back from work and starts on the wine - Drew is sick on the trampoline and mother Mary gets stuck in the bathroom.

By the time Brendan and Helen walk up the drive, Tom is at his wit's end and it looks like he'll owe them another apology very soon.

Drew gets creative with a jar of chocolate spread.

Tom's neighbours have no idea what awaits them at the Whyte household.