Filming on Pucks! is drawing to a close and everyone is focused on what they will do next.
Preview clip 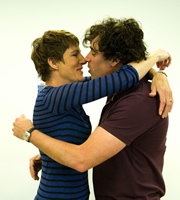 Matt's bid for the lead in a big NBC pilot is put in jeopardy when he learns that TMZ is about to run a story claiming he's going into rehab for cocaine and diet pills.

Carol is furious after having spied Sean meeting with an executive from a rival network. She accuses Beverly who is completely in the dark. Together they question Sean who confesses to having had the lunch.

Carol is given an ultimatum when she shows an interest in Sean and Beverly's script.