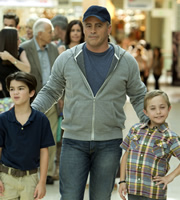 Beverly prepares to return to England, while Sean hangs onto hopes of keeping his Hollywood dream alive. Matt is crushed to learn that his former stalker is no longer obsessed with him. Carol is equally despondent when her dreams for a future with Castor are dashed.
Preview clip

Pucks! is pulled from the schedule, but Matt receives some unexpected good news.