The future of Pucks! hangs in the balance as the network hosts its annual party for the Television Press.
Preview clip 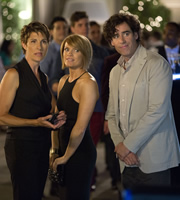 Sean and Beverly's romantic future is looking tenuous. A visit to a sex therapist may only make things worse.

Meanwhile, Merc Lapidus has stolen all of his blind ex-wife's artwork, and Matt is forced to come to her rescue.

Matt speaks to the press about the changes to Pucks!