After a night to remember - and bitterly regret - Beverly returns home to find her husband waiting with open arms.
Preview clips 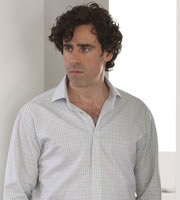 She desperately hopes to put this ugly chapter behind them. The dreadful Pucks! pilot wraps and Sean and Beverly prepare to return to London. However, a final goodbye between Matt and Sean takes an unexpected turn involving a missing Jaguar, a red-nosed reindeer and the smell of cinnamon.

Sean asks Matt why one of his cars is missing and Matt has to make up a story on the spot about his accident.

Matt and Sean get into a fight, with Sean grabbing the nearest thing to hand to throw at Matt - a bottle of his signature 'Joey' fragrance.

Interview With The Cast - Part 7

Matt and Stephen discuss the delicate balance of playing a fight scene for comedy.