Sean's infatuation with the lovely Pucks! actress Morning Randolph is given an opportunity to blossom when Matt invites the two of them to a charity benefit.
Preview clips 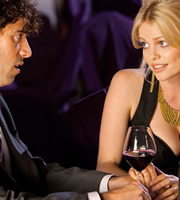 Sean realises that the attraction may in fact be mutual. Meanwhile, Beverly and Carol share a joint and commiserate about the men in their lives. At the end of the night, Sean has a difficult choice to make, and Beverly learns that she has more to worry about her husband and the actress than even she realised.

Matt tells Sean he invited Morning along as a favour to Sean, so he could 'get to know her better'. Sean however is at pains to tell Matt he doesn't do that sort of thing...

Beverly goes to the costume department to find that her expectations of what Morning's character will wear are not met by either Morning or the Wardrobe Master Howard.