Beverly can't stand Matt and the feeling is mutual. As it's all she can do not to throttle the star of her show, Beverly tells her husband "he's yours".
Preview clip 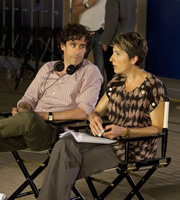 Sean and Matt end up spending the day together, including an extended adventure in Las Vegas. Soon the two guys have bonded, leaving Beverly feeling excluded by her husband's new bro-mance.

Later, in a confrontation with Matt, Beverly learns just how 'big' a star Matt LeBlanc actually is.

Beverly goes to confront Matt about being unprofessional and ignoring her in favour of Sean. But her plans go awry when Matt offers an unexpected point of view, causing her to lose her train of thought completely.