Sean and Beverly are still reeling from the network's decision to cast Matt LeBlanc as the star of their show.
Preview clips 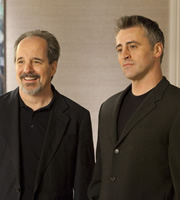 When Sean and Beverly meet Matt LeBlanc at a swanky LA dinner party at Merc's house, Matt couldn't be more charming or flattering about their show.

Unfortunately, over time the natural animosity between Matt and Beverly rises to the surface, and Beverly learns just how much you don't want the former Friend as an enemy.

A preview of Friends star Matt LeBlanc in Episodes.

Beverly worries about how she looks compared to the other women at the glamorous TV party. Carol from the Network is on hand however to supposedly calm her fears...

Sean and Beverly chat to Matt at Merc's party and find out to their surprise not only has he watched their original show - but he actually seems to love it...